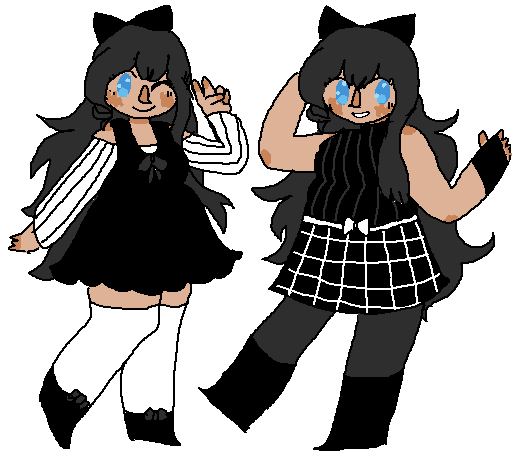 Voice: Highish in pitch, she speaks spiritedly with a bit of flair, as though trying to sound appealing, but maybe she just sounds like that? Higher and faster when excited, she squeaks when her emotions are running high (both positively and negatively).

Chiyoko is a cute and fat girl, standing at 5'4" with long, fluffy black hair that she styles meticulously on a daily basis. She has light brown skin and striking medium-blue eyes. She keeps herself well-groomed and looking nice pretty much perpetually. She wants to look good for the masses.

She's a very fashion-forward girl, with a straightforward aesthetic that she strictly adheres to: she's pretty much always wearing black, potentially with white as an accent, always trying to look fashionable even in casual outfits, so that you'll glance at her and think, oh, she looks good. She always wears her signature big black bow fixed in the back of her hair.

Chiyoko has always had a fixation on horror, and a great interest in it. From a young age, she manifested this interest in the form of shortform writing, and while the contents often had the effect of creeping or weirding out her teachers and classmates, it was undeniable that she had a talent. From middle school, she found herself submitting to and getting published small-scale in magazines and websites, which bolstered her confidence... but she still wanted more.

In NDR, middle school is also the point where she dates Quinn Quinton for a year, they go to prom together, and then they break up when she moves away. It is up for you to decide how much you think this affects her.

In one universe, she decides to elevate from writing short stories to attempting to write a novel, submits to a bunch of different publishers, gets picked up, and knocks it out of the park. She becomes notable in the horror community, gaining a bit of a cult following, and relishing especially in interviews and meetups where she can hone her self-image and present herself as adeptly cute and charming to a crowd.

In another, she frustratedly decides to pick up directing herself when she couldn't garner enough interest in her script. Which is too bad for the directors who turned her down, because she's very successful; her work shoots through various film festivals, garnering her attention and commendations (not without her own trials of self-promotion, of course), rolling her way rapidly towards the big screen. She's not a 'big name director', but at this point she's hardly obscure, and, well, she has received some extra attention for her charming and well-manicured image in interviews. It's no surprise when she gets a Snarvard invite.

Chiyoko is an energetic, perky, cheerful kind of girl, at least on surface-level. The truth is, she's spent the majority of the past few years surrounded by professionals and people much older than her, talking seriously, or talking in front of screens to people in interviews, and her grip on how to interact with normal peers the same age as her has... loosened. She really, really wants to make friends and find love and etc. though!

She's desperate for people to be impressed by her, and wants to be a cool, extravagant personality, which is fine when you're a public figure maintaining an image, but not so great on a person-to-person level. She's extremely friendly, but can talk strangely, sometimes having a tendency to brag or hyperbolize. She likes to talk about herself, and her interests, and is interested in hearing you do the same, but her grasp of normal human interaction can be rickety.

Underneath her fun girl exterior lies a core that is excessively stubborn and hates to be countered, quick to whine and argue if she thinks she's more correct than you are. In spite of her apparent brazen confidence, it's quite easy to wound her pride, and she hates being teased or toyed with. Sometimes, she hides her anger behind the veneer of friendliness, or passive aggression. She's no stranger, however, to hissing at people openly.

Well, in one universe, there isn't a story, and in the other universe, the story hasn't happened yet. We'll see someday?

Shun Shikuza: They get along well. Chiyoko sometimes fawns over them, and appreciates having a friend she can talk about fashion to... or literally anything else, because Shun is a great listener. It's good to feel listened to.

Eri Nanako: They're the only two energetic people of the five of them, so they get a lot out of talking to each other. Chiyoko has no idea what Eri is talking about half the time, and it's likely that Eri is the same. But they have a lot of fun, and they're learning! They tell each other little things they think the other would like.

Yuuta Watanabe: She likes him a lot, for being extremely nice and also a gift giver, but she doesn't seem to understand why he's so shy. Chiyoko likes to brag about being friends with him to others, which is sweet but somewhat terrifying for him.

Yuri Taneda: Another shy person who Chiyoko doesn't quite understand the shyness of, they get along well, although it's a bit overwhelming for Yuri. Chiyoko can be a bit touchy-feely, which can also be kind of overwhelming for Yuri, being the kind of touch-starved lesbian we all know and love. 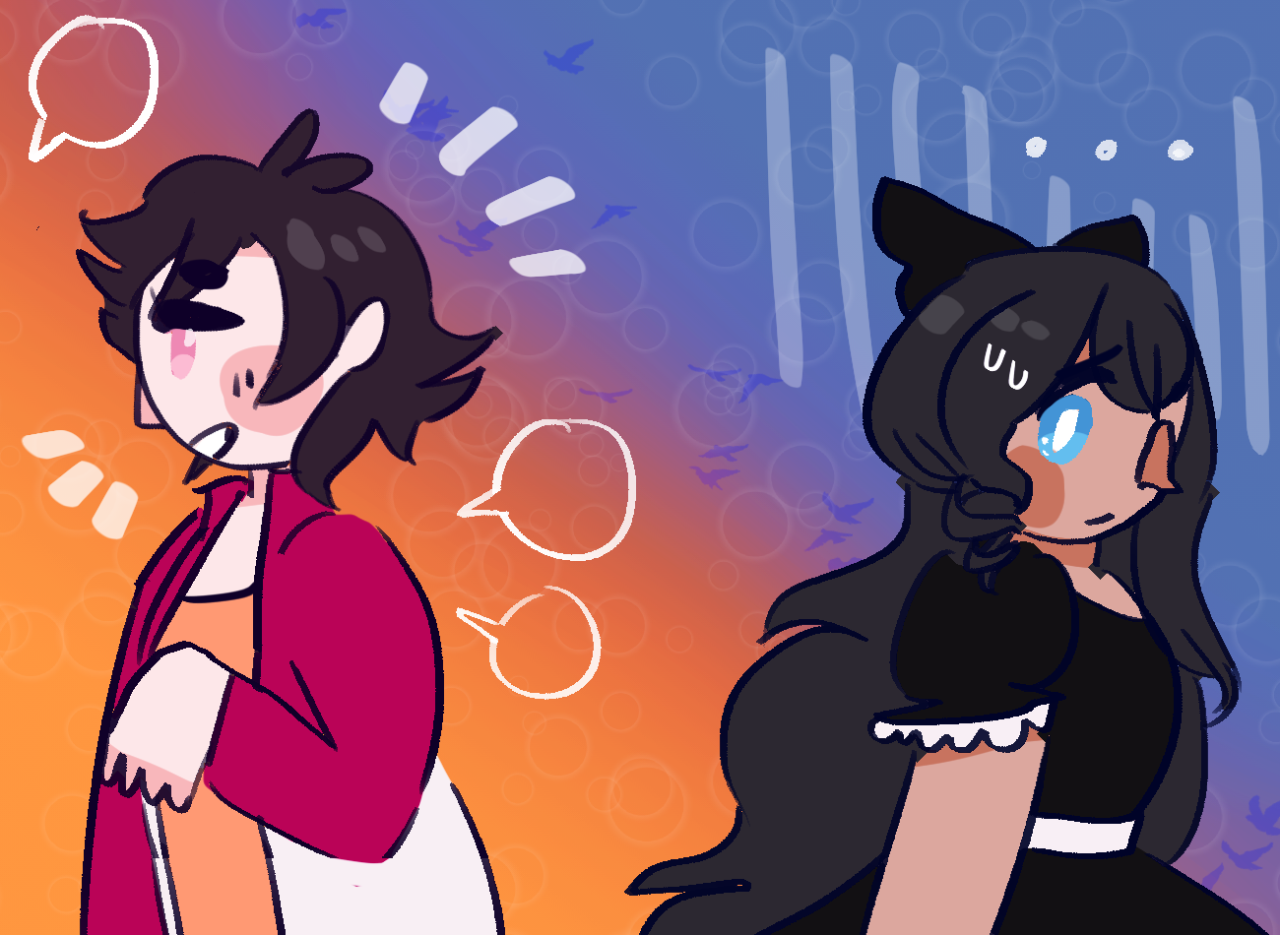 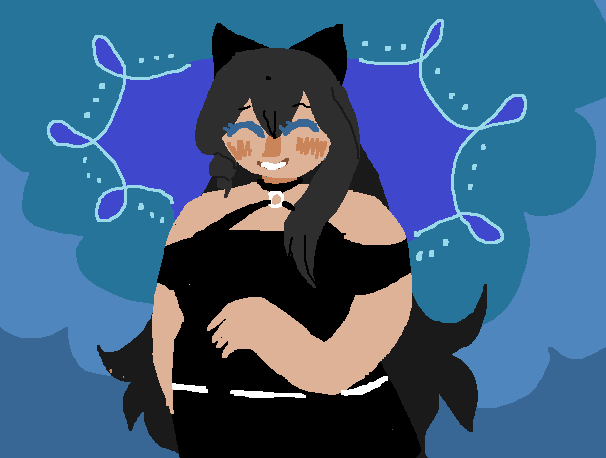 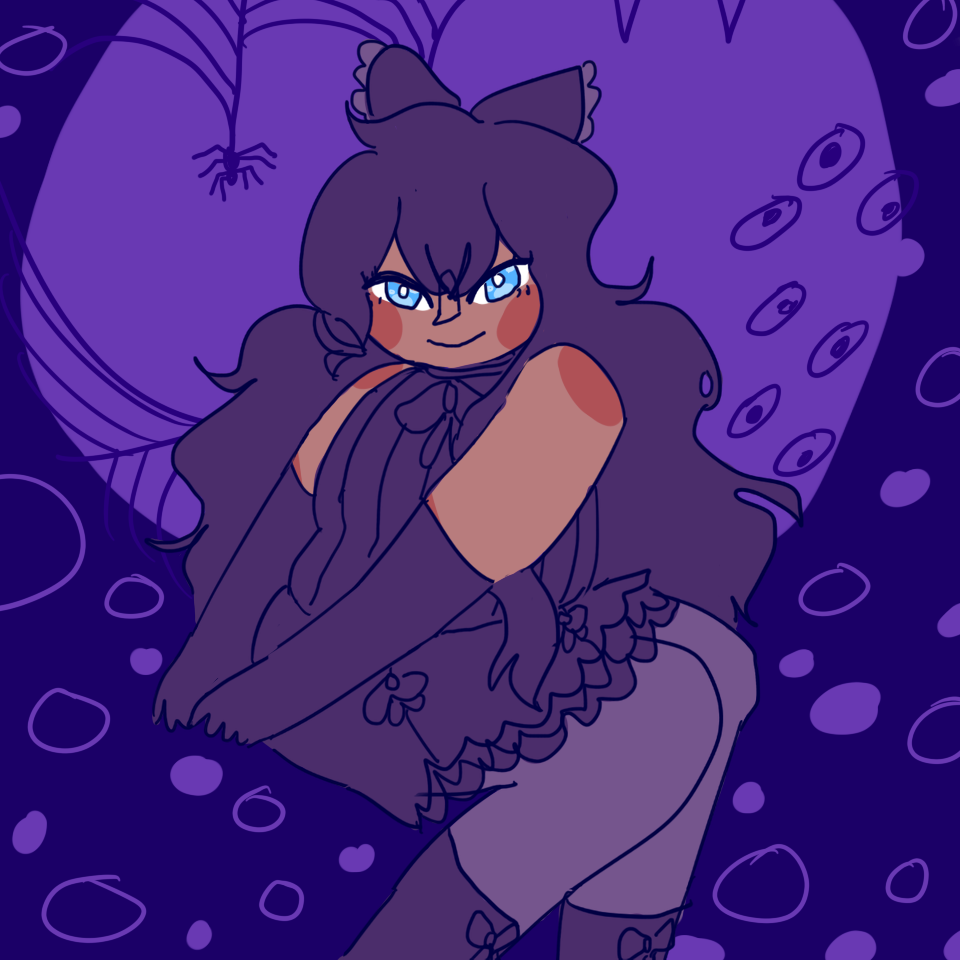 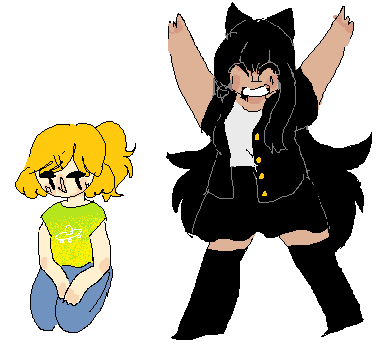