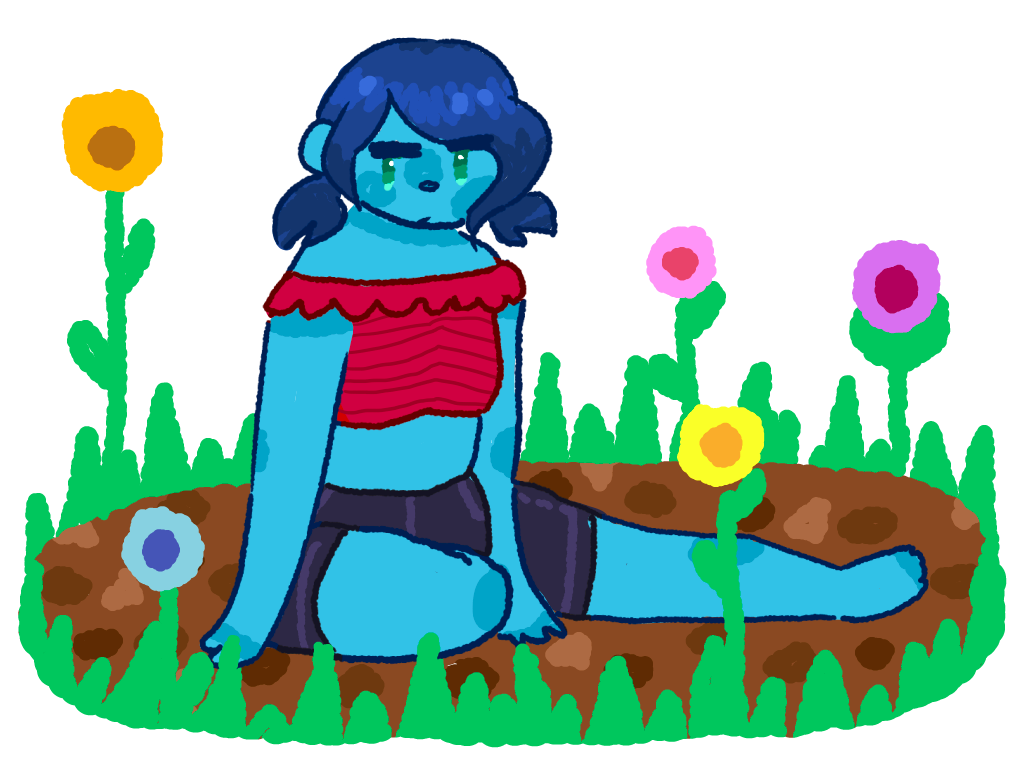 Species: Creature of the Deep

Voice: Higher pitch, slightly nasally. Her intonation always sounds rude and accusatory. Her voice has... a bizarre quality to it. You don't even know how you'd describe it, but really, what else do you expect for a non-human?

Chiri stands at 5'10", with bizarrely impeccable posture. She has bright blue skin, sea green eyes, and deeper blue hair a bit past her shoulders, that she keeps pinned into 2 pigtails. Her skin is oddly soft when not slick with water, and her hair has a thicker quality to it.

Physically, she lacks gills, her breathing more akin to that of a frog. She seems to hate having anything on her skin other than plain water; lotions and oils are a nightmare to her. Her swimming form is immaculate, and she seems to have a much easier time moving underwater than any human ever would. Her teeth aren't razor sharp, but they're sharper than a humans, and her diet seems mostly fish-based, though she's not above scarfing down whatever she has on-hand when she needs it. She doesn't need to eat nearly as often as a human would, but has to keep hydrated more than a human. She seems to prefer warmer temperatures but handles the cold ones like a champ.

She doesn't have any particular sense of fashion, and just wears whatever clothing items she inherited by forcibly taking control of the farm. The previous farmer's fashion sense is her fashion sense now.

On a completely normal-seeming day in the valley, a human-shaped creature washed ashore of the beach. Found by one of the townfolk, they had absolutely no idea what it was, or really if it was alive. However, immediately upon being approached, it leapt to its feet and darted into town, raced across the westward path, and disappeared north towards the long-abandoned farm. It was weird, but no one wanted to investigate a ratty abandoned building with a horribly overgrown and massive yard, so they shrugged it off and left it.

It was a few days until they saw her again, spotting her like a cryptid hacking away at the overgrowth in the yard. Again, very weird, but it was a creepy abandoned farm now with a lady with an axe and a scythe going berserk in it, and everyone really, really didn't want to be the person to deal with it. So they didn't.

After a few mysterious weeks of work, the creature known as Chiri made her first proper, "public" appearance, walking unstealthily into Pierre's shop and demanding seeds. He explained capitalism to her, at which she cussed and insulted him, and then procured various coins from her pockets.

Chiri's motives are unknown, but at this point, she's been 3 years on this farm, and the local economy and produce market has never been better. The farm and its house have never looked this good. No one can explain it, but they're all used to it by now; she's never expressed any kind of positive emotion to literally anyone, but she coexists, so... you know, it's whatever.

Chiri is excessively rude and generally unpleasant to be around. Her vibes are terrible. She has nothing nice to say, she does not like people, she does not like animals. She is overwhelmingly negative, and seems to go out of her way to be insulting and offensive.

In spite of this, she cooperates perfectly fine with human life. She'll sell her produce, she'll support your business, if you interact with her, she'll respond. It's just that she makes it absolutely no secret how much she does not want to. It doesn't seem like her hatred is individualized; nothing she says is particularly biting towards you specifically. She's not going to cut into you. You're just a person, to her, and she doesn't like that.

This attitude seems to be held by her towards all living things. She calls her livestock names. She'll tell her animals that they are idiots who cannot take care of themselves, while taking care of them perfectly. For whatever reason, she simply has spite for living things.

The only thing this spite does not seem to extend to is plants. Her entire house is filled to the brim with potted plants and trees. Her farm is immaculate.

She's an artisan, making mass amounts of products like wine, jam and juices. She produces gourmet oils, homemade mayo, cheeses, well, everything that Stardew Valley lets you make. It's bizarre, really; no one has any idea why she's doing this. She must get some kind of enjoyment from the craft. There must be some reason that she dredged up out of the deep...

Chiri is on Year 3 of her farming adventure and is the most fiscally successful and generally productive Stardew file I have had overall. She is extremely efficient, and has 0 stars with literally every character except Robin, with whom she has exactly 1 star.
She dislikes all townsfolk, and will give them rocks and other useless items to let them know that she does not like them. Robin seems to face the least of her wrath, due to being the local carpenter, who helps Chiri do things that Chiri genuinely cannot do herself. She spares no such kindness for Pierre despite relying on him arguably more, because 'distributing seeds' is not nearly as labor intensive.

Three years in, it seems increasingly unlikely that she will ever make friends or find love with anyone in this Valley. It doesn't seem to bother her. 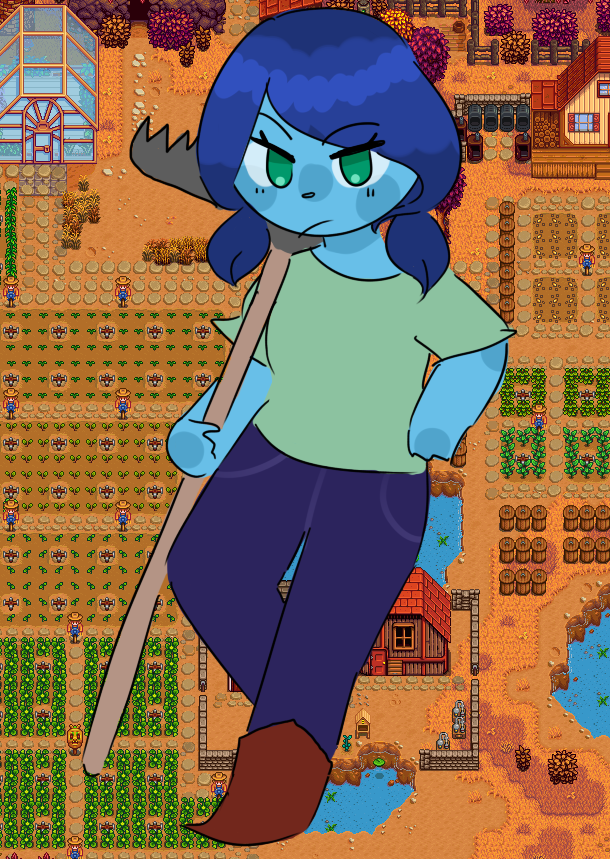 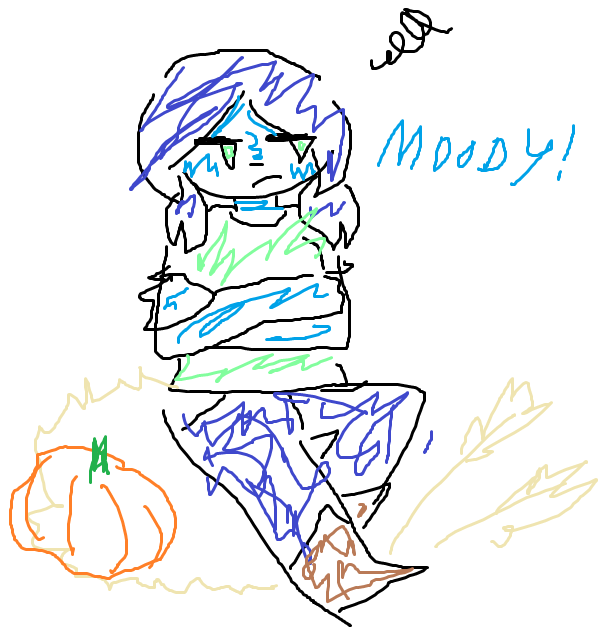